FREE EXPRESS SHIPPING ON ALL ORDERS ABOVE €100!

/ About Us / Reviews / Versalite Jacket Men's 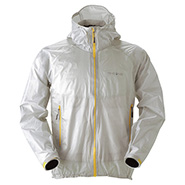 Bikepacking featured the Versalite Jacket and the Torrent Flier Jacket in a view on their website. Here's what they had to say about the Versalite.

“Out of several choices, the Versalite is the jacket I chose to bring on the Trans-Uganda and Congo-Nile Trail bikepacking trip, for pretty obvious reasons. The Versalite is unbelievably lightweight and I require pit-zips. While in Rwanda, the rainy season was starting, so almost every afternoon included a heavy deluge; we usually sometimes ducked for cover, but there were several days where I wore it while riding for a significant time and stayed completely dry. I also used it to layer up during a couple nights above 8,000′. Overall it performed without a fault for both of these conditions; it held out the moisture surprisingly well without becoming a sweatbox, and was comfortable as a layer to wear around camp.” – Logan Watts