FREE EXPRESS SHIPPING ON ALL ORDERS ABOVE €100! 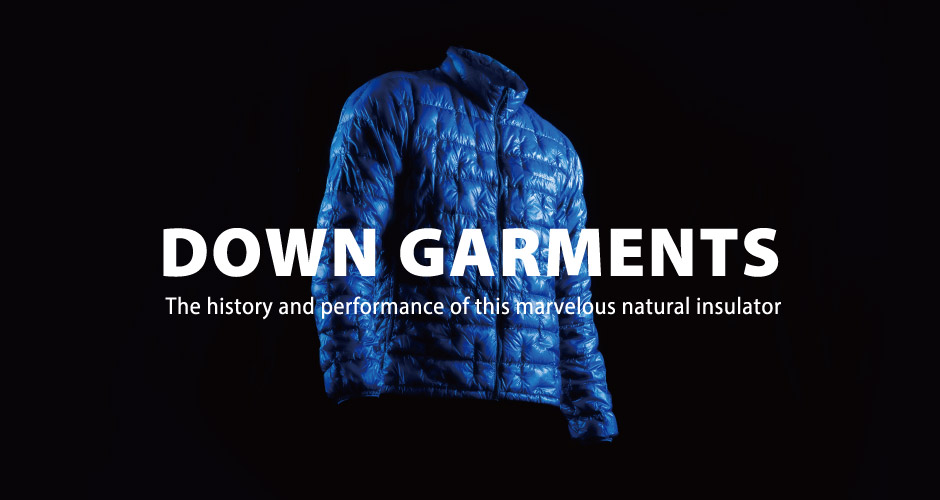 Half a century since Himalayan climbers began widespread use of down-filled garments, this former specialist gear is now a cold-weather standard both on the mountain and around town. In this article, Montbell Advising Director, Fumiaki Masaki discusses the history and performance of this marvelous natural insulator and how Montbell developed the current line of ultra-lightweight, ultra-warm down garments.

History of down garments

Down clothing hit the mountaineering scene with the famous Karakorum jacket, developed by the French company Moncler in 1954. It was also called the Terray Coat, because French mountaineer Lionel Terray helped develop it. This garment became the model for modern, lightweight and high warmth retaining down jackets.

Until the 1970s, many companies released similar jackets named after famous mountaineers, such as the Rene Desmaison by Anoralp in France. I personally used the Desmaison when I was around 20 years old. In those days, down parkas made you look like the Michelin Man, and I was embarrassed to be seen wearing one around town.

In the 1980s, heavy-duty garments became popular in both the fashion and outdoor industry. Down garments utilizing sturdy fabrics of over 100 denier became commonplace, and I often saw Caravan (a Japanese company) products in the mountains. By the way, Montbell manufactures various down items now, but during the 80’s we focused on garments insulated with synthetic materials using DuPont’s polyester, Dacron.

The birth of Ultralight Down 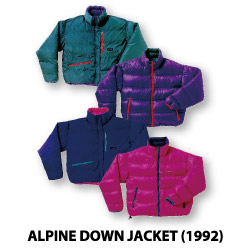 In the 1990s, demand from customers increased, and Montbell began producing down jackets. Our first was the Alpine Down Jacket, which used 50 denier fabric. Although it was light enough at the time, it still looked puffy, and I personally felt we could make a down product that customers could wear more easily in daily life. So we started the process to make an ultra-lightweight down jacket. 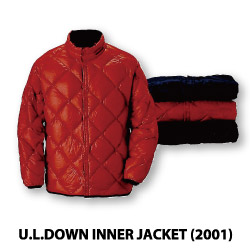 First, we turned our eyes towards a 15 denier ultra-fine nylon, which had just been developed. It was unprecedented to weave this into a fabric, let alone make it into a jacket, but we found a manufacturer that was able to produce the material to our specifications. Then, we used what was at the time the finest goose down available, 725 fill power down. In addition, we changed the standard heavy-duty metal fasteners to ones made of plastic. Finally, we simplified the sleeves and hem to lighten it still further. We finally released the jacket in 2001 as the “UL Down” (UL for Ultra-Light). It weighed just 195 grams.

This was counter to the conventional wisdom about down jackets and won the support of many mountaineers, thanks to it being light, the fact that it was so compact and since we were using less down, it was just warm enough that it could be used as a mid-layer without overheating. If I may say so, this product marked the start of ultralight down, which has now become a general term in the apparel industry.

The secret of Fill Power

Fill Power (FP) is the most common value for indicating the thermal insulation property of down. Until just over a decade ago, any down garment exceeding roughly 550 FP was of high quality, and 700 to 800 FP were of ultra-high quality. So where does 1000 FP down come from?

Down sorting is carried out in a facility with a huge fan, like a blast room. Down that retains warmth better holds more air, so it flies further on the wind. Using this property, down is sorted by classifying that which flies a certain distance as 550 FP, that which flies further as 600 FP, then 700 FP and so on.

In other words, the 1000 FP down currently on the market is extremely rare and valuable, representing the highest quality down extracted from already high quality down.

Large down clusters are necessary for a high FP. These can only be harvested from mature waterfowl, raised in an environment with bitterly cold winters and large temperature differences. It may be possible to extract down with an even higher FP in the future, but it would be necessary to create an environment to facilitate steady growth by improving feed and allowing the geese to reach full maturity.

For example, the Hutterites are a people who live in simple, agrarian colonies, predominantly in Western Canada. The down from the geese they raise is attracting attention for the large, warm down clusters that are collected after a longer rearing period than usual. In this way, we need to think about the whole way of raising birds, not just the down itself.

Why is down with high fill power warm? 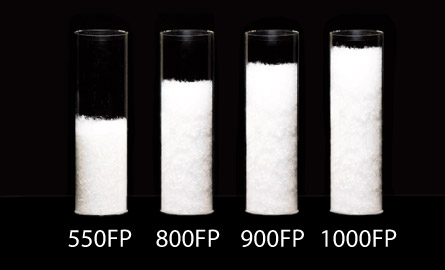 This represents the volume per 30 g of down. The higher the number, the higher the air content and the higher the quality. Generally, 600 - 700 FP is considered good quality, and 700 FP or above is high quality down.

Down over 800 FP guarantees high heat retention even at a low weight. You can produce a lightweight down jacket with the same warmth as a heavier product by using a down with a higher FP. 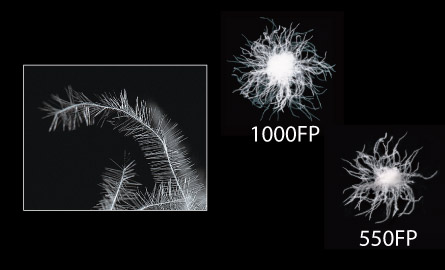 The higher the FP, the larger and the higher the density of the down clusters. These have a greater number of longer filaments called barbs, allowing more warm air to be stored. Each barb has a myriad of fuzzy barbules, which prevent air convection.

What is the difference between goose and duck? 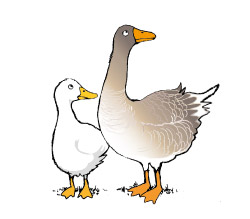 Generally, lower quality than goose, but some varieties such as Eider Duck have better warmth retention than goose. The thickness of the barbs is on average 2 microns.

Adult geese are bigger than ducks, so they produce bigger down clusters. The thickness of barbs is as much as 4 microns on average, and they are stiffer.

Is it possible to make artificial down?

Down is very lightweight and has the advantage of high warmth retention. Its drawback is that if it gets wet, it loses volume and its ability to retain warmth decreases. To overcome this issue, products made from “water-repellent down” -- down with a water-repellent finish on it -- were announced by several companies several years ago. Montbell chose to stick with untreated down due to concerns regarding the long term durability of the water repellant and possible negative impacts on the down's long term ability to loft.

Synthetic insulation has been made for a long time, aiming for the same warmth retention as down. However, each high quality down cluster has countless barbs, and each barb has countless small barbules, giving it a huge surface area with which to trap warm air. It is impossible to recreate such fine fibers with our current technology. Natural materials such as wool and down are not products that humans have developed, but are an evolutionary adaptions to the environment. Because the structure of down is so unique, after you purchase your brand new down garment, you should take care of and properly maintain the down so you’re able to get the most use out of it. 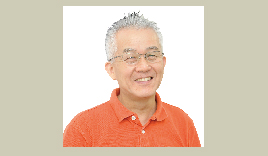 Fumiaki Masaki was born in Osaka Prefecture, 1952. He is the Advising Director of the Board at Montbell. In 1972, he went on an expedition in Europe and climbed the north face of the Grandes Jorasses and was the first Japanese climber to climb the western face of the Aiguille de Dru. In 1975, long time climbing partner and current CEO of Montbell, Isamu Tatsuno asked Masaki to go into business with him and the two formed Montbell. Over the years Masaki would be involved in product research and development, production and sales. His area of expertise is materials, particularly fabric and fibers.

Helping choose the best down for you! Montbell Down Guide